Review: The Changeling by Philippa Gregory 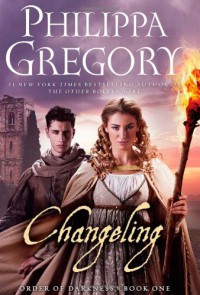 Dark myths, medieval secrets, intrigue, and romance populate the pages of the first-ever teen series from #1 bestselling author of The Other Boleyn Girl.

Italy, 1453. Seventeen-year-old Luca Vero is brilliant, gorgeous—and accused of heresy. Cast out of his religious order for using the new science to question old superstitious beliefs, Luca is recruited into a secret sect: The Order of the Dragon, commissioned by Pope Nicholas V to investigate evil and danger in its many forms, and strange occurrences across Europe, in this year—the end of days.

Isolde is a seventeen-year-old girl shut up in a nunnery so she can’t inherit any of her father’s estate. As the nuns walk in their sleep and see strange visions, Isolde is accused of witchcraft—and Luca is sent to investigate her, but finds himself plotting her escape.

Despite their vows, despite themselves, love grows between Luca and Isolde as they travel across Europe with their faithful companions, Freize and Ishraq. The four young people encounter werewolves, alchemists, witches, and death-dancers as they head toward a real-life historical figure who holds the boundaries of Christendom and the secrets of the Order of the Dragon.

''Wauw 2 reviews at one day?'' you must think. Well I started this book for #tbrtakedown 2.0 for the challenge ''out of your comfort zone'' and I was right. I didn't like it at all. Even though it is only 256 pages long, I decided to mark it as dnf-ed when I was at page 63.

That I give this a 1 star, doesn't mean that nobody could like it, but I just didn't like it at all. From the beginning I knew that Isolde and Luca would end up meeting each other because of the chapters and I just didn't care for the characters at all.

There was also a thing about after Isolde's father dead and her brother that I was like: really? You really believe your father lied to you and told to your brother that he wanted other things for her than what he had told her before he died. She and her father were really close together and then she believes her brother over her father?!

I just couldn't get into it and decided to not finish it, because I do not want to waste my time to books I don't like.

Have you read The Changeling or other books by her and what is your opinion about those? Maybe I'll give her an other shot, but I'm not sure.